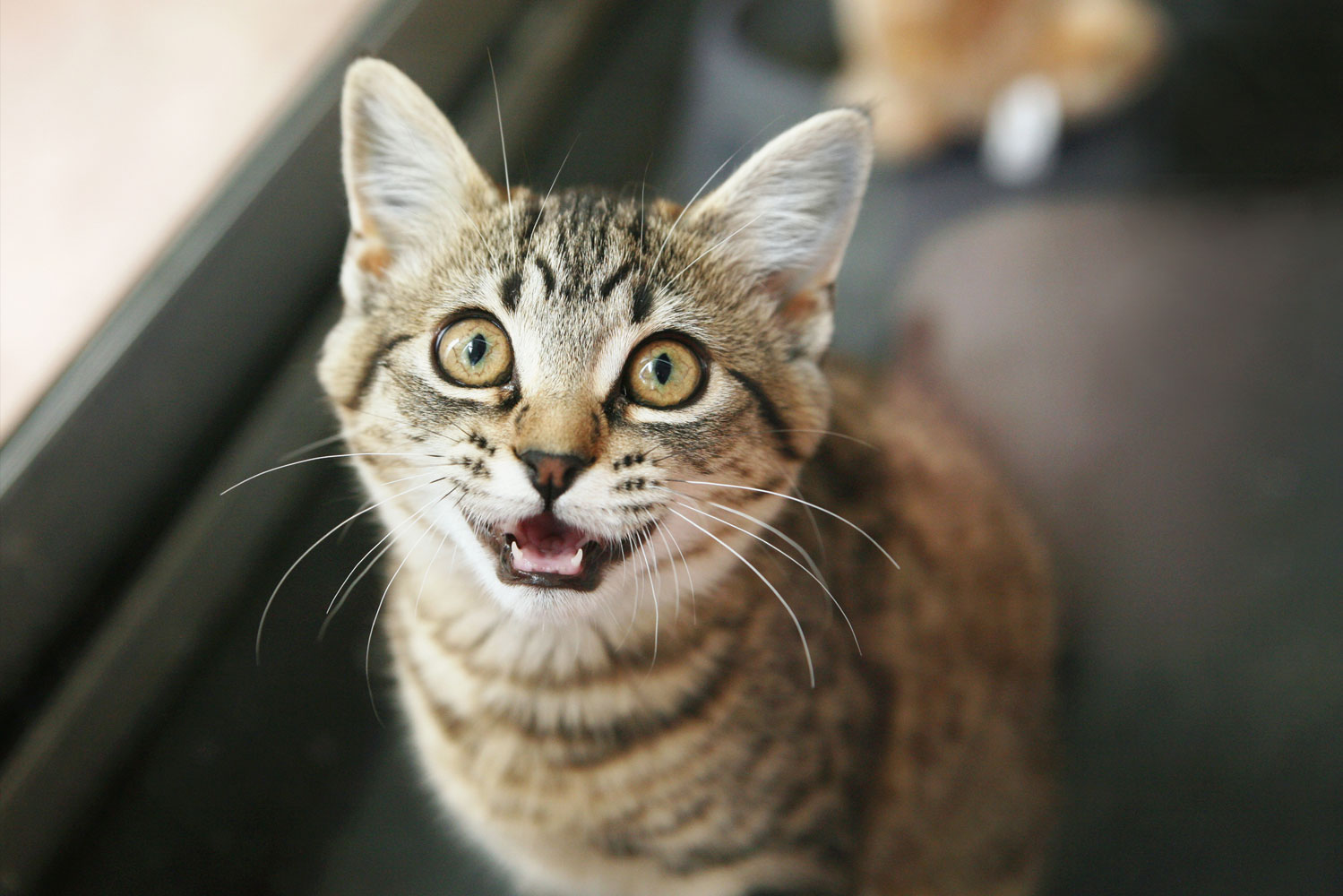 Have you ever wondered how many sounds your cat can make? Experts assure us they could be more than 100! In this article you will find a description of the most frequent ones and their meaning.

Cats and humans can be very much alike, but perhaps we haven't dedicated enough time on getting to know them better and become aware of this.

Already in ancient Egypt the quintessential sound of a cat was “meow”, which meant “cat”. This sound can last between a fraction of a second and various seconds and cats produce it by opening their mouth and then gradually closing it again. In some cases the meowing can begin or end with another sound, such as a trill or a grunt.

There is no specific meaning. It can serve to call attention to something in its surroundings, making it possible for us to understand the cat's message. A meow near a closed door may indicate the cat wants to go out and one near an empty feeder that the cat is hungry. It is believed that most meows are random sounds which the cat learns to use to communicate with the people around, so that each household with a cat has its own glossary of meows for food, caressing, playing, attention, etcetera.

Tips #1. Did you know that adult cats use meows mainly to communicate with people and almost never with other cats?

Although they do not have a specific meaning, meows can transmit information about the emotional state of the cat and the urgency of its “message”. Generally speaking, the more intense the emotion, the stronger the meow. In situations which are unpleasant for cats, such as suddenly being combed or being in an unknown place or in the veterinarian's waiting room, cats emit long, guttural meows which are very intense and in a low pitch.

On the other hand, when cats feel comfortable, such as when they are being fed or are looking for physical contact with their owner, the meows are shorter and more high-pitched and with a rising intonation.

Tips #2. Did you know that deaf cats emit especially intense and noisy meows?

Kittens who are less than one month old emit a distress call which sounds like a very high-pitched meow and serves to warn their mother of an emergency situation. The calls of a kitten which is cold are very high-pitched (especially during the first four weeks of their lives when kittens do not yet regulate their body temperature). Those of a kitten which is left alone are especially loud and those of a kitten trapped somewhere, for instance under its mother, are long-lasting.

Cats understand each of these distress calls to perfection and react accordingly.

Tips #3. Deaf cats cannot hear the distress calls of their kittens and may not realise they are in danger. This is why people say they do not make good mothers.

This is a low and rhythmic sound that a cat emits without opening its mouth. Kittens make it while they are being breast-fed, while grown-up cats produce it in many pleasant situations, for example during contact with another cat or a human or while the cat is rubbing itself against an object or “kneading” a blanket. Yet cats do also purr in circumstances which can hardly be considered pleasant, like during a visit to the vet, when they are ill or in pain, during delivery or even when they are on the brink of death.

It is therefore most likely that purring expresses an intense emotion, whether pleasant or not, and serves to stimulate the attention and contact of another individual. In this sense it can be compared to the smile of a human, which can express happiness but also a state of discomfort or pain in which the individual seeks the help of others.

This is a sound in between meow and purr, characterised by an ascending tone and lasting less than a second. Cats produce it without opening their mouth. It is one of the sounds that mothers and kittens exchange, but it can also be used by adult cats to friendly greet other cats or humans.

When “the hormones call”, both male and female cats emit a kind of intense and prolonged moaning to attract a partner. Males also do it to warn other males of their presence. These sexual calls are often reason for many owners to decide to sterilize their pet.

A cat which tries to defend itself and threatens can completely open its mouth and expel air in a brusque way. The result is a kind of whistle which lasts around a second and is called a hiss. Within three months kittens already know how to do it! If the emission of air lasts only a fraction of a second, the resulting sound is a spit or short hiss.

These are threatening noises which sound like endless meowing. They are characterised by a high pitch and very high volume. Such intense threatening serves to avoid direct fighting between cats.

This is a threatening sound in a deep tone which can last between a fraction of a second and several seconds.

9. Scream or screech of pain

This is a sudden, high-pitched sound, very loud, which cats emit when they have hurt themselves. This scream also signals the end of mating.

This sound is difficult to describe but impossible to forget once you have heard it. It is a sequence of high-pitched sounds which a cat emits while at the same time its jaw is trembling. The typical situation in which a cat emits this sound is when it has fixed its stare on a prey and there is a barrier in between. It signals a state of strong excitement and possibly frustration for not being able to reach it.

Here ends our lists of the main sounds cats make. Do they sound familiar to you?

9. Scream or screech of pain, https://freesound.org/people/StormMiguel/sounds/191938/